Cat Phones have been around for several years aimed at those that need to work with their phones. Current thin glass front and back devices, even if waterproof will not survive a tough day on the construction site. Cat has your back with a range of tools that are tough and work-ready. Steven Ambrose takes the CAT S42 out and about.

Rugged phones have become more relevant as we move to an app-based society that relies on connected smart devices in the daily operation of our businesses. The challenge for most smartphones is that they have become slim, sleek, easy to carry gadgets, and this has resulted in a complete lack of ruggedness. Bullitt, the manufacturers of the CAT phone range, identified this gap and have been producing reliable, rugged and work-proof devices for several years.

The new Cat S42 is firmly aimed at the hard-working crowd at a reasonable price with decent build and specifications and full enterprise compatibility including three-year updates and industry-specific apps.

From the moment you unbox the Cat S42, it looks like a chunky, rugged phone.

The Cat S42 is relatively heavy for a 5.5-inch handset, measuring 12.7mm deep 77.2mm wide by 161.3mm and weighing in at 220g. It has a ribbed matte-black rubberised backplate, protective bumpers on all the corners, as well as hinged covers for the Micro-USB charge port, no USB C here, on the bottom. A standard 3.5mm headset jack is included on the top, and there is a SIM/MicroSD card tray on the left side.

The screen is a standard IPS panel with HD+ resolution (1,440 x 720 pixels, 293ppi), I found the brightness to be adequate with good maximum brightness and wide viewing angles. The screen is Gorilla Glass 5 with a small lip from the casing which offers some additional protection.

The bezels are relatively large which give the CAT S42 a slightly dated look, but in context of the intention of a rugged work device, this makes sense as it offers greater screen ruggedness than current edge to edge screen devices

I found the screen quality to be fair, and the screen even worked when your fingers and the phone is wet or a little muddy. In bright light, the automatic brightness adjustment was too coarse and slow to react fast enough when pulled from your pocket. I finally turned this off and set the brightness manually. This did reduce battery life a little though

The Cat S42 does not offer a fingerprint sensor or any face recognition. Unlock is a standard pin. The Cat S42 has an IP68 rating, which means it can resist sand, dust and dirt, and can be immersed in water up to 1.5m in depth for around 30 minutes. Besides, the CAT S42 is also MIL-STD 810H compliant and can cope with thermal shock, vibration, and humidity. The handset has also been drop-tested on every side and corner multiple times from 1.8 metres onto a solid surface. 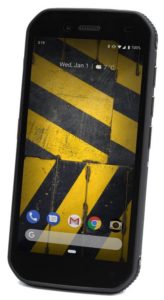 The CAT S42 has a front 5MP camera, and the back camera is a 13MP camera with a LED flash unit. The camera is decent for the main part and offers good rear pictures with decent selfies. The primary camera struggles in low light and does not handle motion well.

Overall the camera is usable and will serve its intended purpose.

The CAT S42 compromises with the internal processor and memory. An entry-level MediaTek Helio A20 chipset powers the Cat S42 with a quad-core ARM Cortex-A53 CPU and a 550MHz IMG PowerVR GE8300 GPU. There is a modest 3GB of RAM and 32GB of internal storage. You can expand the memory using an external SD card.

The battery life is also good, partly due to the slow processor and lower-resolution screen and a full charge lasted until at least 11 PM with moderate to heavy usage including navigation and use of apps.

Android 10 is standard as the operating system and has no custom overlay. This results in a simple standard and easy to use interface. A folder called Toolbox offers a curated selection of apps under various headings such as Cat Apps, Business Tools, Farming, Construction, Outdoors, and Rugged Tools. Many are industry-specific, and some are useful. If you find that the 32GB of internal storage is too small, you can always uninstall some of the third-party apps.

Rugged simple and effective sums up the CAT S42. This is not a phone for everybody but as a second device for work, off-road biking, construction, and any other situation where you need an unbreakable rugged communication tool. For the price, the CAT S42 hits the target. The performance can be a little slow, and gaming is not an option. Daily usage is good and the tools provided are useful.

Overall there are better performers at a much higher price, but the CAT S42 hits the sweet spot in its price range.